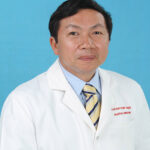 Dr. Mok Theavy is the first plastic surgeon in Cambodia. He received his medical doctorate in 1990 from the University of Health Sciences, Phnom Penh. Since then he has worked in the general surgery department at the Khmer-Soviet Friendship Hospital. In 1994 he was among ten doctors chosen for six years of specialized surgical training with interuniversity Ghent-Phnom Penh, which included a one-year fellowship for head and neck plastic surgery in Ghent, Belgium. In 2009, Dr. Theavy was the first recipient of the International Observer Fellowship awarded by the Canadian Society of Plastic Surgeons. He spent four weeks observing pediatric plastic surgery, craniofacial and upper limb trauma, and microsurgery in four Edmonton hospitals.

Since 2002 Dr. Theavy has served as Medical Director of Smile Cambodia. As a Medical Director, he works with the Cambodian government and regional hospitals to plan and undertake medical missions and education programs. In addition to providing services for thousands of patients, the missions are instrumental in providing valuable training for Cambodian medical professionals. In 2003, Dr. Theavy was featured in a documentary produced by USC’s Annenberg Center that chronicled Smile Cambodia’s efforts in Cambodia, and received the Medical Visionary Award for his efforts with Smile Cambodia.

Dr. Theavy is committed to the education and training of Cambodian medical professionals in addition to his role at Smile Cambodia. He is a professor of surgery at International University, University of Health Sciences, and University of Puthisastra. He has organized numerous surgical trainings at the Khmer-Soviet Friendship Hospital, in collaboration with NGOs and professors of surgery from around the world. These trainings provide Cambodian surgeons and medical staff with invaluable experience as well as foster a spirit of international cooperation. Dr. Theavy has presented his work at many scientific conferences.

In recognition of his efforts to build the surgical profession, Dr. Theavy was appointed to be a committee member of Cambodian Society of Surgery in 2002. Since 2006, he has collaborated with the medical team from American Academy of Facial Plastic Surgery Society “Face to Face” to conduct first microtia surgery and training mission at Khmer-Soviet Friendship Hospital. In 2007, he was awarded the Royal Government of Cambodia’s Gold Medal of Work for his efforts to develop human resources in Cambodia through teaching. In addition, he was also awarded the Bronze Medal in 2009 for his collaborative projects with international NGOs, medical professionals, and the Khmer-Soviet Friendship Hospital.

Since 2009, Dr. Theavy began working with the Rotary Club Likas Bay and Lu Chou conducting missions in Cambodia at the Khmer-Soviet Friendship Hospital. Dr. Theavy maintains a close relationship resulting in missions held several times per year at Smile Center in Phnom Penh and other provinces of Cambodia. In 2014, Dr. Theavy has assembled medical professionals of plastic reconstructive surgeons and established and holds the position of President of Cambodian Society of Plastic, Reconstructive, and Aesthetic Surgery. He also started the first Plastic Residency Program at University of Health Sciences with the approval from Ministry of Health and now functions as chairman. Currently, Dr. Theavy is a deputy director of Khmer-Soviet Friendship Hospital.

Dr. Tan is a Board Certified Pediatrician in private practice since the 80’s in Long Beach, California. After surviving the Khmer Rouge genocidal regime, in forced labor camps, he embarked on a perilous journey by foot to escape to the Cambodian-Thai border’s refugee camps.

After living in the Refugee Camps in Thailand for over a year, and almost six year-long ordeal, he was at last resettled for a new life in San Francisco, where he worked as a Health Worker and Interpreter. He went on to complete his Pediatric Residency Training at the University of Hawai’i John A. Burns School of Medicine/Kapiolani Medical Center for Women and Children in Honolulu, Hawai’i.

He has been involved in multiple local hospital leadership positions. He was the Chair of Pediatric Medicine at Miller Children’s Hospital/Long Beach Memorial Medical Center and current Chair of the Pediatric Department at St Mary Medical Center, Long Beach. He served as a Board member of the Department of Health and Human Services of the City of Long Beach (1998-2006). He has been on the Board of Directors and Advisory Board of The Children’s Clinic, Long Beach since 1999, Founding Board member, VicePresident, and Secretary of the Cambodian Coordinating Council since 1999.

He is the President/Founder of the Cambodian Health Professionals Association of America (CHPAA). Besides English, he speaks Khmer (Cambodian), French, Chinese, and conversational and medical Spanish.

An avid hiker, he has hiked most of the local mountains including San Gorgonio, San Jacinto, Mt. Baldy, Half-Dome of Yosemite. His most memorable hike was his trek to the majestic and mythical Himalayas in Nepal, reaching Kalapatar and Mt. Everest Base-Camp.