Prepping for Mission 11 is in the works. Some of the ordered medical supplies and medicines are arriving. Lots of volunteers needed to help prepackage to send to Cambodia. 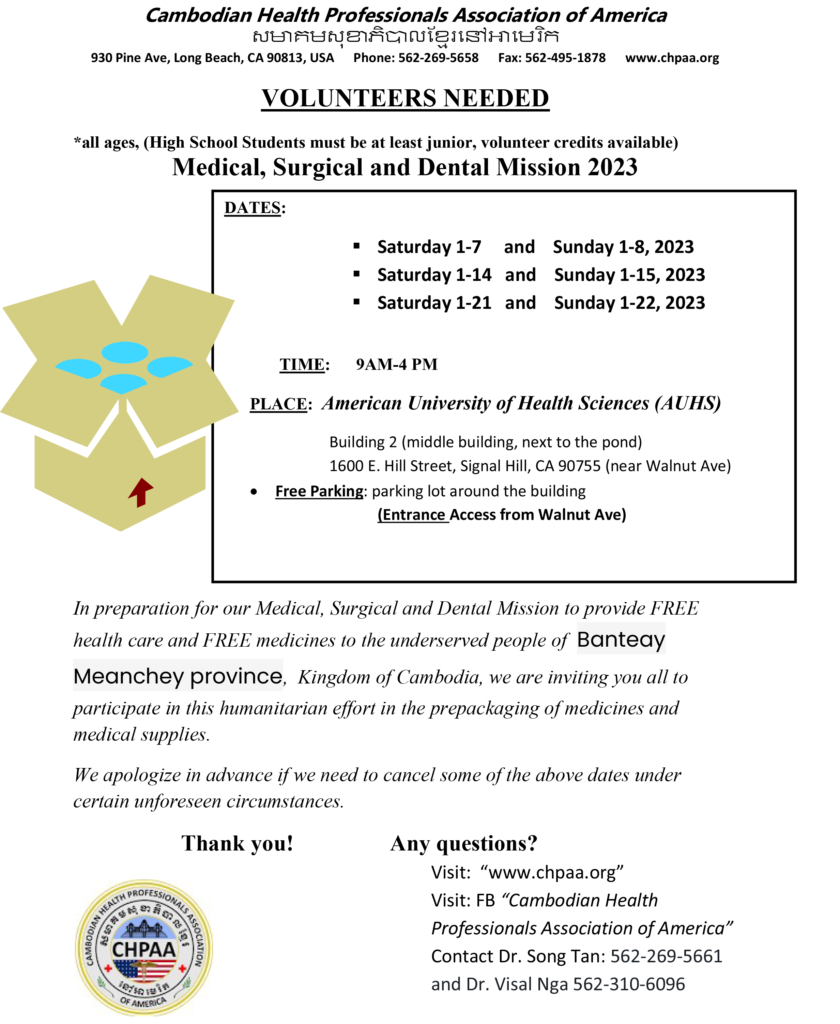 If you have already submitted the mission application, be sure to also submit your flight itinerary so CHPAA can schedule your pick-up and drop-off at Phnom Penh airport.
Click to Submit
CAMBODIA

The 12th Annual CHPAA Gala pictures are out!

Join us on the upcoming mission 11 to Banteay Meanchey province from January 25 to February 9, 2023.
(Expired)

Although our online application is closed, we are still accepting applications on a case by case basis. Please contact Dr. Song Tan for paper application at [email protected].

On behalf of CHPAA, we urge everyone to go get vaccinated as soon as possible. The vaccines are safe and effective. Let us do our parts to end this pandemic together!

Promoting Health Through Service and Education

Cambodian Health Professionals Association of America (CHPAA) is a nonprofit organization that is exclusively humanitarian, working to promote health and social well-being through ongoing service and education to medically underserved Cambodians living in both the United States and Cambodia.

How can you help?

We strengthen community by promoting healthy lifestyles, regular check-up, and education to local Cambodians and other ethnic groups.  Providing communities and individuals with information about the US healthcare system.

We offer locals junior highs, high schools, and universities  students an opportunity to volunteer and serve their community.  We mentor local Cambodian-American students entering the healthcare professions.  100 percent of our volunteering students have been accepted to graduate school.

We conduct annual medical, surgical, and dental mission to Cambodia to provide medical care services and education free of charge to the under-served Cambodian population .  We have completed 10 missions and looking forward to our 11th Mission to Banteay Meanchey Province, Cambodia in January 2021.

Check out our latest mission

We provide scholarships to deserving students and volunteers pursuing careers in the healthcare field.

Dr. Tan is a Board Certified Pediatrician in private practice since the 80’s in Long Beach, California. After surviving the Khmer Rouge genocidal regime, in forced labor camps, he embarked on a perilous journey by foot to escape to the Cambodian-Thai border’s refugee camps.

After living in the Refugee Camps in Thailand for over a year, and almost six year-long ordeal, he was at last resettled for a new life in San Francisco, where he worked as a Health Worker and Interpreter. He went on to complete his Pediatric Residency Training at the University of Hawai’i John A. Burns School of Medicine/Kapiolani Medical Center for Women and Children in Honolulu, Hawai’i.

He has been involved in multiple local hospital leadership positions. He was the Chair of Pediatric Medicine at Miller Children’s Hospital/Long Beach Memorial Medical Center and current Chair of the Pediatric Department at St Mary Medical Center, Long Beach. He served as a Board member of the Department of Health and Human Services of the City of Long Beach (1998-2006). He has been on the Board of Directors and Advisory Board of The Children’s Clinic, Long Beach since 1999, Founding Board member, VicePresident, and Secretary of the Cambodian Coordinating Council since 1999.

He is the President/Founder of the Cambodian Health Professionals Association of America (CHPAA). Besides English, he speaks Khmer (Cambodian), French, Chinese, and conversational and medical Spanish.

An avid hiker, he has hiked most of the local mountains including San Gorgonio, San Jacinto, Mt. Baldy, Half-Dome of Yosemite. His most memorable hike was his trek to the majestic and mythical Himalayas in Nepal, reaching Kalapatar and Mt. Everest Base-Camp.